In recent months I have become much better at getting on with things. I seem to be able to sit down and work when I need to (more about THAT in another post…) and I am also doing considerably less Farting About. That said, Farting About (or as other people call it, procrastinating) is actually an important part of the creative process. Sometimes I need to do an activity that is still creative, but in a different sort of way.

I currently have two go-to sources for this particular need, and the first one is Minecraft.

Now, I realise that users of Minecraft are probably not this blog’s target demographic, and unless you are an eleven year old or the parent of an eleven year old, you may not have come across this word before. Until about a year ago, my only awareness of it was that it was a computer game that involved zombies and creepers and endless YouTube videos, some of which seemed to involve characters called Stampy Cat and squid (or, with the benefit of knowledge, Stampy Longnose and his trusty sidekick iBallistic Squid).

(I should point out, in case you’re a Minecraft expert, that I’m going to spend the rest of this post explaining things in pretty basic, and possibly incorrect, terms. My knowledge of it all is still very small. So please bear with me and please don’t tell me off if I get something wrong. When. I mean when I get something wrong, not if.)

So I started to become a tad concerned about my son’s growing obsession with this game. By way of example, our early conversations consisted of:

Son: Mum….?
Me: Yes?
Son: You know when you’re in the Nether, and you get the ender dragon, did you know you can only defeat it if you have an enchanted bow and arrows….[or something like that anyway]
Me: Is this in Minecraft?

Son: Mum….?
Me: Is this going to involve Minecraft again?
Son: Never mind.

After a while I thought I’d better have a look myself, you know, just to make sure this wasn’t some clever cover for paedophiles to groom children online. I went in blind – that’s pretty much the only way to go in, unless you buy a book, because there isn’t a tutorial. I’d heard the first night was tricky. I lasted about two minutes before the zombies got me. Didn’t like it, much. And then my son told me, a while later, that it’s possible to turn the zombies, creepers and whatnot (collectively known as ‘hostile mobs’) OFF by changing the difficulty level to ‘peaceful’.

Well, dear reader, that was the moment my eyes were opened and my life changed. You see, without the zombies and skeletons and whatnot interrupting you all the time, you can just get on with the fun stuff – building things! Mining! Exploring! Discovering wonderful things!

Now as well as playing ‘peaceful’ difficulty level, it’s also possible to play in ‘creative’ mode or ‘survival’ mode. In survival mode, you have to find everything you need to build with. This is a challenge, but it means you just have to get out there and dig, or climb, or make things yourself. In the alternative, creative mode, you have absolutely everything in your inventory from the word go.

At first, I played in survival mode. Creative felt like too much of a cheat. What was the point of doing anything, if it was all there on a plate? Bor-ring.

I was fine with survival, then, right up to the point where I decided I needed to build a minecart/railway combo (mainly because I wanted a rollercoaster). For that, you need a lot of iron, and potentially a fair bit of gold if you want to power your tracks – resources which take a lot of finding. I grumbled inwardly about this for a while and pottered about building things, even experimentally opened a new world in creative mode just to see how I got on, built a super-house, that kind of thing…. 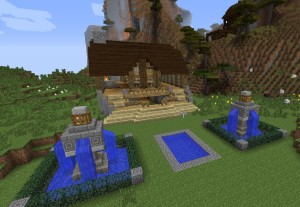 It has a working fireplace and a pool complex in the basement.

So far, so good, but I was still mourning the rollercoaster I wanted to build in my existing, survival-mode game.

Then my son told me that it was possible – easy, in fact – to transfer an existing game from one mode to the other.

Well, dear reader, forgive me for sounding like I’ve lost my grip on sanity, but I was so overwhelmed I nearly cried with joy (in my defence, this revelation came about just after I’d finished a particularly traumatic bout of edits).

A new minecraft world opened up to me – one with infinite creative possibilities. And now that I’m waiting for the copy edit to come back, I’ve been a busy bunny and I thought I’d share the fruits of my activities with you!

This is my house (on the right). I nicked it off a witch, and then tastefully decorated it. 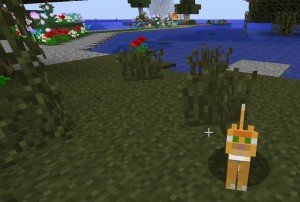 I’ve recently acquired a cat, by taming an ocelot using a fish. This is actually my second cat. The first one decided to follow me when I was trying to create an underwater house, and it didn’t make it. 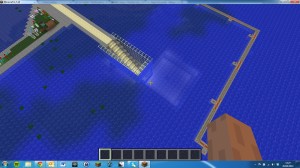 Here’s an aerial view of my underwater house, with the railway line in the foreground. I haven’t put much in the house yet, but I have a lovely set of sandstone stairs leading down to it, and lots of glass so I can see the squid swimming around, and the sun setting through the water above. 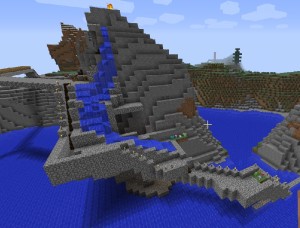 Here is my waterslide, which I created when I was still doing this in survival mode. It represents a LOT of mining to get all that cobblestone. 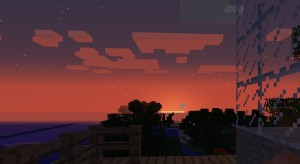 Talking of sunsets, this is the view from the sun terrace of my other house, just before bedtime. Nice, isn’t it? Sunrise is gorgeous too.

And this, everyone, is the first try at a rollercoaster. It links in to the railway system so you travel from the top of the mountain all the way to my house (and back again, because I haven’t worked out how to stop it yet. Can’t seem to manage the buttons). I’m planning to do a ‘dark ride’ next which goes right through the middle of a mountain and outside again. Because, well, why not?

Now, I know what you’re thinking. I’ve just been sucked into the same maelstrom of computer-based pointless activity as my son, right? Well, okay, fair point well made, but there are benefits to this. It takes careful thought to build these things – you need to calculate how many blocks you need, the best way to go about it, you need patience, determination and persistence. More than anything, it means I have a common ground with my son in which we can discuss things, not just about building and battling spider jockeys, but also about other important things like determination, persistence, and creating your own adventures.

I do think I’m regressing a bit.

Remember I mentioned that I have two go-to activities at the moment? Well, the other one is this: