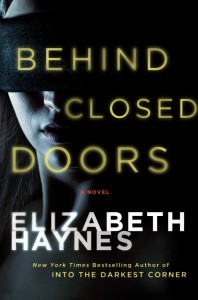 The second instalment in the Briarstone Major Crime series, Behind Closed Doors is the story of Scarlett Rainsford, who disappeared while on a family holiday in Rhodes ten years ago. Scarlett’s disappearance was one of the first investigations Lou Smith worked on, and not being able to find Scarlett has been one of her biggest regrets. So when Scarlett turns up unexpectedly working in a brothel in her home town, Lou is desperate to find out where she’s been all these years. But Scarlett isn’t ready to talk, just yet – and she’s not too keen to see her family again, either.

The inspiration for Scarlett’s story came from a number of media reports into trafficking cases in the UK and Europe. I read several memoirs of women who had been trafficked, but the one that stood out most for me was Slave Girl by Sarah Forsyth. Sarah’s story was the starting point for me, thinking about what might have happened to Scarlett over the years and what might have prevented her from coming home.

Trafficking is one of those subjects that the media helpfully allows us to gloss over; even the recent Home Office advertisements encouraging us to realise that ‘Slavery Is Closer Than You Think’ still permits us to remain one step removed from it, because it doesn’t affect us, it is a parallel universe, the victims and the traffickers may be in our communities but they aren’t a threat to us, are they? We don’t employ domestic slaves. We don’t know people who work as prostitutes. Therefore why should we care?

Put like that, it sounds harsh. But thanks to the media we are able to file trafficking in the mental space that’s reserved for ‘things that happen to other people’ and even, possibly, ‘misfortunes that people have brought upon themselves.’ The traffickers and their victims, after all, are ‘foreign’, aren’t they? This is a by product of immigration, isn’t it? These women are trying to get into the UK, to steal our jobs and our benefits.

Regrettably, it isn’t that simple. Trafficking isn’t something that only happens to people desperate to get into the UK. People become a commodity for all manner of reasons, and the linking factor is that choice doesn’t come into it. These are human beings, bought and sold, in modern, civilised, progressive European cities. It has to stop.

I wanted to write about trafficking from the point of view of a white, middle class British girl to try and challenge our perceptions of trafficking and how, actually, it affects all of us. And whilst Scarlett’s story is entirely fictional – and Lou’s team are also busy investigating a murder and attempted murder in Briarstone, which might be linked to Scarlett’s reappearance – it’s worth bearing in mind when you read it that even the UN has no sound methodological approach for estimating the number of trafficking victims globally. This article in the Observer puts the figure at 2.4 million world wide, of whom 80% are trafficked into the sex industry. The UN believes that 61% of trafficking victims are women and girls.