Back in the shed today*. The sun is shining, Bea is sunbathing, I have a Starbucks medium roast brewing in the coffee maker, a whole day of editing stretching before me with no interruptions – life is good. 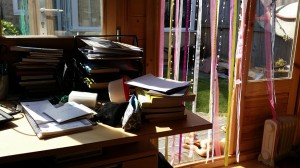 It’s especially good because, just for a change, I’m all fired up and ready to go thanks to a great weekend spent at CrimeFest, the international crime fiction convention, which was held in Bristol. I had the BEST time, and taking aside the things I always enjoy, like having a whole weekend talking about booky things and seeing some great writing friends, I thought I’d share some of my highlights.

I met the lovely Claire Kendal, author of my top recommendation of the year The Book of You (Amazon.com link). We had mango bellinis in the bar of the hotel and then had dinner on the Thursday night. We got on so well! If you haven’t read The Book of You yet, you really must – particularly if you enjoyed Into the Darkest Corner. You’ll love it. Claire was on a debut authors panel, and then another panel on the Sunday about suspense. 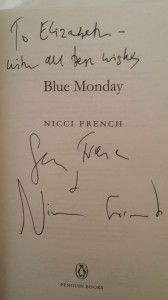 One of the must-see panels for me was about writing in partnership, and featured Nicci Gerrard and Sean French, who write together as Nicci French, and Alexander Ahndoril and Alexandra Coelho, who write as Lars Kepler. As you may know or have suspected, I am a massive fan of Nicci French. The early books had a big influence on me.

In particular I love the way the authors use structure almost as a plot device in itself – see Beneath the Skin for a brilliant example of how they pull the rug from under the reader.

My own experiments with narrative structure (using a before/after narrative in Into the Darkest Corner, using the voices of the dead as well as a male and a female narrator in Human Remains) are at least partly inspired by Nicci French.

Anyway, after the panel (during which I was gazing at them all with a rapt fangirl awe) I ran to the bookshop to get the first Frieda Klein book in the hope I’d be brave enough to get their signature, but I got waylaid and by the time I got back, they’d gone. All was not lost, however, as Nicci was moderating a panel on psychological thrillers later on the Saturday afternoon. After it finished, I loitered in the foyer talking to some friends and then was unforgivably rude, interrupting the conversation and running off because I’d seen Nicci and Sean looking like they were about to leave.

Well, as you can see from the picture, I got my book signed! And I got to talk to them, without fainting. They were LOVELY. I know that’s my most over-used word, but really it’s true, they were so kind.

On the Saturday night, I went to the Gala Dinner at which the winners of the CrimeFest awards were going to be announced. One of these was the e-dunnit (e-book) award, for which Under a Silent Moon had been shortlisted. I was pretty thrilled as the longlist was enormous, and didn’t hold out much hope of winning given the illustrious authors on the list. Anyway, I didn’t win, but I did get a big cheer from the people on my table (none of whom knew me from Adam before the dinner) which made my night. The winner was Derek B. Miller’s Norwegian by Night, which also won the comedy award. I did wonder why hardly any of the shortlisted authors in all the categories were at the dinner, especially since several of them were at the festival, but afterwards I can almost see why. Despite being overjoyed with the nomination, never mind the shortlist, your heart does start thumping when they make the announcement just in case – because, you know, it’s just possible – and then once you don’t win, it’s quite hard to keep your face happy. Even when you’re actually relieved inside that you don’t have to go up in front of a roomful of people and try and be sensible and articulate. 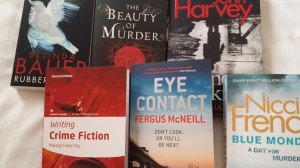 I consoled myself by spending too much money in the bookshop. As well as the free books in the goodie bag, I ended up coming home with this haul. John Harvey is one of my all-time favourite crime writers, and although I missed getting my book signed, I did get to share a lift with him, briefly, and was brave enough to say ‘loved your panels’. I didn’t get to see Belinda Bauer’s panel. I’ve had Rubbernecker recommended to me so many times I had to get it, and I loved the sound of A.K. Benedict’s time travelling detective so much I had to buy that one too. Lastly, I saw Fergus McNeill on a panel and was so taken with the concept behind his debut novel Eye Contact (he’s written two so far, the second is called Knife Edge) and by his wonderfully refreshing attitude towards the (real life) police that I had to get that one, too. And he signed it for me, lovely man. (I can’t believe how many of the authors who were on panels didn’t actually attend other people’s panels. But Fergus did, along with lots of people I’m friends with. Hence I am hoping we are now friends – he’s brill.)

Finally, on the Sunday morning, I went to the panel on emerging indie authors. Mainly went to support three friends, the fabulous Mel Sherratt, and Joanna Penn and Tim Cooke, who I’d met for the first time on the Friday night but have known through Twitter for some time. There is always a bit of a concern that the first panel on the Sunday morning, given the fact that crime writers often spend the entire night in the bar when they get together in any sort of group, is a little under-attended. Well this one wasn’t – and those who did make it were in for a treat. What a fabulous moderator Jo was – chatty, witty, engaging both the panel and the audience and getting everyone enthused about independent publishing. My eyes were well and truly opened as to what a positive, not to mention lucrative, enterprise it can be. For those who may be considering self-publishing, I urge you to go and look at Joanna Penn’s website, which is a mine of useful (and free) information about it.

Aside from anything else, how fabulous is it to sit in the audience of a brilliant panel with your smartphone and download all their latest books, most of which were bargain priced, before they’ve even finished speaking? 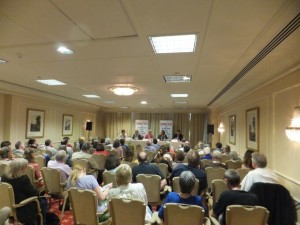 I’m a bit out of sequence here, but I was on a panel too, with my great friend Lesley Thomson.  Lesley is a fellow Myriad Editions author, and we’ve done quite a few panels together now which always helps with the nerves.

Also on the panel were Chris Longmuir, who was LOVELY and writes dark novels set in Dundee, and Felix Francis, son of Dick Francis, who is continuing to write thrillers set in the world of horse racing. A charming and witty man! 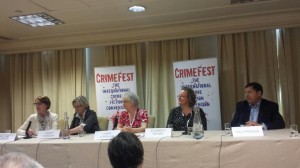 The panel was chaired by Pauline Rowson, who writes the DI Andy Horton procedural series. It was quite late in the afternoon, the last panel before dinner, so I was quite surprised how many people were there. Pauline’s husband Bob took these pictures and I pinched them from Pauline’s Twitter.

At some point – I think it was the Saturday evening  – I had a bit of a lightbulb moment when it comes to my own writing. I always planned for Under a Silent Moon to be the start of a series, but I never had a proper sense of the shape of it, if you know what I mean. I am so used to not planning my books that it never crossed my mind to plan the series structure, whilst knowing that it needed a structure of its own. I had a vague idea that there would be at least three books, and if they were successful I’d just keep writing them. I am working on the edits for the next one, which is called Behind Closed Doors, and I have ideas for the next book as well as potentially another short story. But beyond that – well, it was a bit vague. Not any longer! I am making big assumptions that they will all get published, but I know now exactly how many books there will be in the series, and what will happen to the major characters over the course of it. The plots of the individual books are still undecided, but I have a framework in which to construct them. I’m not only being deliberately obtuse, I’m quite hazy over the details myself to be honest, BUT I am getting excited about Louisa and Sam, and Jason and Andy, and the other characters who will take starring roles in later books. They have some adventures ahead of them.