Hello my lovely friends, I hope you are well?

It’s been a long time since I wrote, and until quite recently, that applied to my fiction writing too. I might have mentioned that we were planning to move house, and this year we did just that – we moved from our little 1980s house in Kent to a bigger house, with an annexe for my mum and a big garden, in beautiful north Norfolk. They say that house moves are one of the most stressful things you can go through, but I’m usually pretty good at dealing with stress so I thought I would be okay. After all, moving to a wonderful place can only be a good thing, right?

My lovely writing shed was sold to a really nice family and was dismantled and taken away to a new life as a summerhouse in an orchard – that happened back in April.

Despite having no real reason not to write – I wasn’t packing the whole time, after all – I just couldn’t do it. For once I had no deadlines, no writing pressures, so really if we were going to move house at all, it was the perfect time to do it. But the trouble is I think I need a deadline to write, and as I didn’t have one, my time evaporated into other things.

In July we moved house, and in October my mum moved here too. We had a fabulous summer exploring this beautiful area, the house was and is fantastic – my son had two weeks at his new school and then the whole summer to enjoy. We are just a couple of miles away from a sandy beach, and even closer to a tranquil woodland for long walks with Bea. It really did feel like being on holiday, so when I still didn’t manage to write anything, I blamed it on that; I thought when the weather turned, I would get back to work. I have a lovely study set up (indoors this time! Yay central heating!) with a view over the garden. Even the wifi worked eventually… so there was nothing to stop me.

And yet I still couldn’t write.

It began to get quite worrying. What if I’d lost the ability to write completely? What if it never came back? I mean, the mortgage is now pretty scary… I was still doing events, talking about writing, and I felt like a complete fraud. I wanted to preface every introduction with ‘well, yes, technically I AM a writer, but I’m suffering from writer’s block at the moment…’ And I have to say, up to this year, I don’t think I really understood what writer’s block was or felt like. I mean, we’ve all had days where we’d rather do something else than write, but what happens is you eventually sit down and get on with it, and you’re fine. That ‘eventually’ didn’t seem to be happening for me.  The more time that passed, the more worrying it became.

The one hope on the horizon was NaNoWriMo, heading towards me at a rate of knots. As you know, I’ve participated in NaNoWriMo every year since 2005, and the only time I didn’t win was in 2009 when I switched writing Human Remains (at 12k words) to editing Into the Darkest Corner. So NaNoWriMo is like a touchstone for me, my magic charm, and if I couldn’t write then – in my tenth anniversary year! – well I would know I was in serious trouble. But this year’s NaNoWriMo was always going to be different, hundreds of miles away from all my writing buddies and my favourite writing haunts… I had no idea what would happen, and I have never been more scared heading into what’s usually my favourite month of all.

Just before NaNoWriMo kicked off, two things happened that made a whole world of difference.

The first thing was that someone shared this blog post with me on Twitter. In case the link doesn’t work, or you’re too busy to click through to it (do it when you have more time, I guarantee it’s worth it), it’s by Mary Robinette Kowal and it’s called Sometimes Writer’s Block is Really Depression.

Well, my lovelies, I cried when I read it.

I’ve had depression before but one of the few positives is that I’ve always been able to name it, and tackle it when I felt strong enough. Such a large part of my issue this year has been that I didn’t understand what was happening to me and therefore I had no way of fixing it. In this case I don’t think it was a serious bout of depression, but it WAS stress from the move and it was spiralling because the fear of not being able to write anymore was feeding it. By recognising this and naming it, it instantly became less scary and then it was something I could tackle; and that simple fact made me a whole lot better. I hadn’t lost my writing mojo permanently! It was stress! And once I dealt with the stress, my writing mojo would come back.

Well HELLO November, I thought, I’m ready for you now.

On Halloween, or as I prefer to call it now Nano Eve, my favourite night of the year in which stories dance in my head and words fidget on the starting line, I remembered the Neill Technique, which my dear friend (and fellow NaNoWriMo author) Barbara Neill had developed last year. I had tested it out at the time and thought it was great, but I had no real need of it when I was already writing quite happily. Now was the perfect time to put it to the REAL test… and so I found my copy and gave it a whirl. The Neill Technique is designed to get you writing, no matter what it is that’s holding you back. If you need a boost at any time, or if you think that you might have writer’s block or whatever might lie behind it, I highly recommend you give it a try.

My dear friends, it may sound silly but this is my LIFE, it’s what I’ve always wanted to do and to suddenly NOT be able to do it any more is quite a horrible thing. So to find the words flying out of you more than they EVER have before, despite the worries, was just an incredible relief.

Here is my happy ending to this sorry tale: 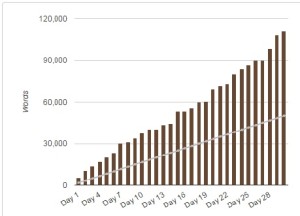 It was my best year ever. I wrote 111,415 words in thirty days. I wrote 60,578 words of a new Briarstone novel, and then I switched mid-month and wrote over 50,000 words of a Victorian psycho-drama which might turn out to be a thriller after all (mine always seem to end up that way). So – not one novel but two, in two different genres, neither of them finished yet BUT the good news is that I’m still writing. The further good news is that, thanks to NaNoWriMo, I have found some new writing buddies here and made some really good friends too.

I’m hoping I’ll have something new for you all very soon, but in the mean time, thank you for your patience with me. I hope your own writing, if that’s what you love, is going well – and if it isn’t, give the Neill Technique a try. I can highly recommend it.